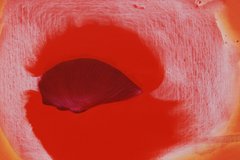 Hansina Iversen is a Faroese artist educated in Iceland and Finland. She primarily explores non-figurative painting.

The interplay between the world and the spirit, between nature and mankind is perhaps the most prevalent theme in Faroese art. Faroese painters have through generations sought images that can portray the states of mind, the moods and the feelings that nature awakens in them and they have sought forms in nature that can be used to explore and express their own inward struggles.

The artist Hansina Iversen, however, seems less driven by this need for self-expression. Both the world and the spirit, both nature and mankind are present in her paintings, but only as distant traces, hints or suggestions. The intensity of her art is not primarily generated by an exploration of herself and her relation to the world surrounding her, but rather by an exploration of the abstract.

Line and colour are the essential elements in the art of Hansina Iversen. The artist has removed all traces of reality, she has separated everything irrelevant from the image and instead created a distillation of form. By insisting on the importance of the relationship or interplay between line and colour, she forces us to reject the idea of art as imitation and instead we become aware of pure aesthetic considerations. We become aware of the essence of form, of the clarity of line and the depth of colour, and we experience – all at the same time - the intense, the subtle, the immediate, the warm and the vivid.

So, although Hansina Iversen’s imagery may not derive as directly from the natural world as we generally see it in the Faroese tradition, and although her pictorial world is not as connected to the inner workings of the soul as that of her expressionist colleagues, the confrontation with her paintings is no less intense. Hansina Iversen has proved that the interplay between line and colour is just as powerful, enigmatic and infinite as the interplay between the world and the spirit or between nature and mankind.